By Ivan Hanthorn, a humble student of bonsai Michael Hagedorn in his famous hat

The Iowa Bonsai Association was graced with the opportunity to host Michael Hagedorn for a weekend of bonsai workshops at the end of April 2007. [April 28-29, 2007] Hagedorn had recently returned from Japan (where he apprenticed nearly three years in Nagano with bonsai master Shinji Suzuki) as a red-hot star who was on the program that year at just about every bonsai convention of any importance at all.

Interested in bonsai since his teens, Michael received a Masters degree in Fine Arts in Ceramics in 1994 at the New York State College of Ceramics at Alfred University. He then founded Crataegus Bonsai Containers. Crataegus and Michael are featured in the recent book Bonsai Potters by Daan Giphart and Levon Arzooyan (available from Stone Lantern). While running that successful business, he studied with Boon Manakitivipart concurrently with Gary Wood; Gary would drive from Alabama, pick up Michael in Arizona, and then they would road trip to California sharing tall tales about little trees.

Having mastered both of the two components that together makes a bonsai–the tree and the pot–Michael has an unusual breadth of expertise to bring to his teaching. In addition, he has a command of presentation nuances little understood in this country. As part of his internship with Suzuki, Michael had the daily assignment of installing new tokonoma exhibits in a series of related but different tokonoma in a bonsai museum. While yet an apprentice, seven bonsai that he wired were accepted into the Kokufu show in Tokyo, two in the Taikan Ten, and one in the Sakafu show–all in Japan. He has published in Bonsai Today and International Bonsai. He is now poised to become one of the small number of true bonsai masters in this country.

Saturday morning Michael gave a demonstration using a twisted shimpaku randomly picked from the material that was to be used in the afternoon workshop. These delightful eight-year-old twisted kishu shimpaku had been developed by Gary Wood. In the course of that demonstration there was the usual patter between presenter and audience in which Michael’s sense of humor was obvious. There were some more serious matters also. The sensei of the day said that there were some things about philosophy, aesthetics, and the spirit of bonsai more easily addressed in writing that discourse, and noted that he refers to some of these matters in his upcoming book to be published later in the year. [Published in 2008 under the title Post-Dated: The Schooling of an Irreverent Bonsai Monk.]

A Sunday afternoon workshop was a ‘Bring Your Own Tree’ event. I had been collecting native material for several years but could never quite get used to the rough foliage of the native red cedar. So in the Sunday afternoon workshop Michael taught me (and the whole group) how to veneer graft shimpaku starts (remember those twisted shimpaku?) onto a delightfully shaped Juneperus virginiana literati trunk.

Sunday morning was available for those who wished to book personal design time with Michael, an opportunity which I readily grabbed. We discussed various aspects of bonsai development and culture while focusing on an older meter high larch the future design development of which had kept me stuck for a considerable time. By the end of Sunday morning that larch had a future. By the end of the day the red cedar had a future. And by the end of the weekend I had six pages of notes of bonsai information nuggets.

Of that treasure of profundities I will briefly note here three of the sensei’s sayings that really stood out for me. One: pay attention to the rashi–the species character. Two: balance trumps rules. Three: move the branch in the direction the wire is going (or contra wise, wire in the direction you want to move the branch). There was oh so much more. Michael Hagedorn has a lot to teach us. 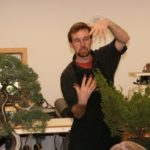 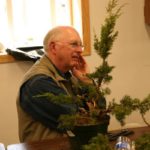 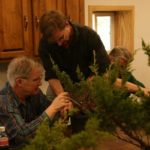 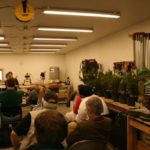 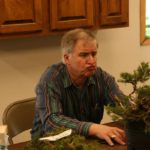 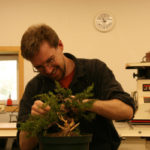 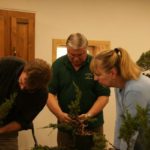 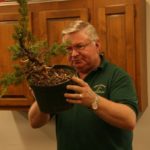 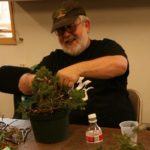 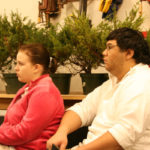 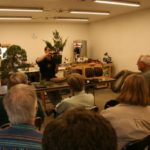 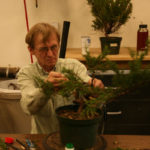 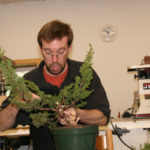 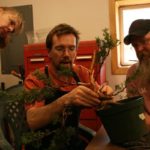 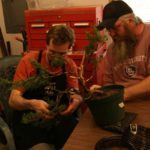 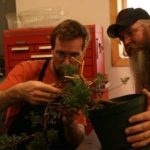