Browse: Home / About Us

About the Iowa Bonsai Association 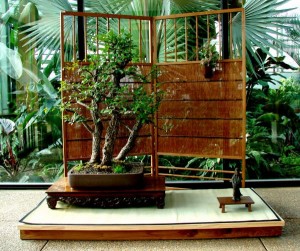 The Iowa Bonsai Association is a non-profit organization dedicated  to developing horticultural skills, artistic skills, and friendship for the people of Iowa. Meetings as well as special events and workshops are open to all members and non-members. Membership is open to anyone with an interest in the art of bonsai or horticulture in general. Income is primarily derived from donations and membership dues. Annual fees are $25 for a single membership, $35 for a family membership, and $100 for a vendor membership.

Meetings are held monthly on the third Saturday of each month (with the exception of December which is skipped) at 9 AM at the Greater Des Moines Botanical Garden, and are open to all members and visitors. Meetings include a short program in which all members may participate in the discussion, followed by hands-on experience. Participants are encouraged to bring trees for help and suggestions on care, styling, etc. Regular open Board meetings are held quarterly starting in January. The dates are published well in advance in the monthly newsletter. All members are encouraged to attend and join in the discussion. Motions are made and voted on by board members after ample discussion by all members present.

Association members can participate in various annual events, including a spring Botanical Center event and a fall show at Reiman Gardens in October. Many club members enjoy participating in a one-day judged show event at the Iowa State Fair. The state fair event is open to anyone who gets their entry in before July 1st.

Four awards are offered to association members at the annual November Awards Banquet. The George Roupp Award for service for the current period and the Jim Hatfield Award for novice achievement are awarded each year. The Helen Fagan Award for distinguished service, and the Richard Kimzey Award for achievement for more than one year, is awarded every other year.

A library of books, are maintained by the Association for free use available at the Greater Des Moines Botanical Garden public library. A current list is included elsewhere on this website.

Association members are privileged to be responsible for the maintenance of the Hirsch/Landany Bonsai Collection at the Greater Des Moines Botanical Garden, the only public bonsai exhibit in Iowa. Trees are frequently brought to meetings for pruning and styling, and members also volunteer time through out the year for their care.

Bonsai, a horticultural art form going back hundreds of years in oriental history, in recent years has become a “new” interest to a group of Iowans. In 1980, a number of Des Moines area residents, who shared an enthusiasm for bonsai, determined that there was a need for a bonsai organization in the state. The result was the origination of the Greater Des Moines Bonsai Association, now known as the Iowa Bonsai Association. Charter members signing the articles of incorporation for the new non-profit organization were Helen Fagan, Mary Furr, Kay Kogel and Bill West, all of Des Moines.

A schedule of monthly meetings was arranged. Officers in 1981 were Helen Fagan, President, Mary Furr, Vice President, Naomi Maahs, Secretary, and Jack Dutter, Treasurer. To raise funds for this fledgling organization, members and friends donated numerous items for a “garage sale” held at the Exhibit Hall of the then, Des Moines Botanical Center. Proceeds from the sale were used for club necessities plus an amount over $750 which was donated to the Des Moines Botanical Center’s funding project for an enclosure over the center’s bonsai display.

IBA members contributed to the early education sessions of the organization. Dr. John Holcombe, who studied bonsai with John Naka, and Dr. Doug Paul, who has an extensive bonsai collection, both contributed information and expertise to new members of the organization. Arnold Webster from Cedar Falls was also a guest lecturer. In November of 1983 the Iowa Bonsai Association applied for and was granted membership in the Iowa State Horticultural Society (ISHS). Naomi Maahs was the group’s representative on the board. At the ISHS annual meeting in 1984, Helen Fagan received the organization’s merit award for her efforts in starting the Iowa Bonsai Association and for her other community horticultural endeavors. George Roupp from Marshalltown served as president of IBA from 1984 to 1987. Mr. Roupp, a bonsai enthusiast for many years before the founding of the organization, had an extensive bonsai collection and library of bonsai literature. He was awarded the ISHS merit award in June 1988 at the annual ISHS meeting. The Iowa Bonsai Association hosted the 1988 meeting, which was held at the Des Moines Botanical Center. Guest luncheon speaker was Chase Rosade, a bonsai master from Pennsylvania who gave a bonsai demonstration for the group and also taught a workshop later in the day.

Richard Kimzey became president of the organization in 1987. Because of his leadership and enthusiasm for bonsai, the organization’s membership more than tripled after he became president. Mr. Kimzey was also a member of the steering committee from eleven Midwestern states who met to form a coalition of bonsai groups to exchange speakers and educational activities. As a direct result of that, IBA was able to host international bonsai expert Horst Krekeler from Heidelberg, Germany in the spring of 1987. The Midwest Bonsai Alliance selected Iowa to host a regional conference in July 1992. The Iowa Bonsai Association membership was solely responsible for organizing that event which became the first Mid-America Bonsai Alliance Symposium. International involvement included members of the Shanghai Botanical Gardens and Masters from Japan and China joining local, regional, and national clubs in sharing training techniques, trees, and a wide spectrum of diverse knowledge.

From the earliest years of the organization, bonsai shows and displays were held several times a year at various locations, including the Greater Des Moines Botanical Garden, Village Square Mall, Johnston, Reiman Gardens, Ames and the Iowa State Fair.

Following Richard Kimzey, Terry Swanson became president of the Association. Bill Todd was president from 1993 to 1998. Bill served as a vendor at Association meetings and other events. He also conducted workshops and demonstrations around the state.

Alan Magruder was president from 1999-2001. Alan and his wife Helene have presented many programs representing the Association. Alan has used his carpentry skills to create, among other items, bonsai description card holders and the backdrops used at the Iowa State Fair, the Reiman Garden’s Fall Show, and other events. Recently Helene has held basic bonsai classes in her studio with club members assisting.

Stew Moore took over as president in 2002. Bill Todd and Alan Magruder each took turns again as president of the club. In 2009, Dave Lowman became the president and served until 2012 when Helene Magruder served as President. David Richmond is presently the President and he has served in this capacity since 2013.

Many members of the organization have donated time and talents for the programs. They include among others, Rob Shumaker from Des Moines, Pete Svec from Cummings, Brian Hazlett from Cedar Rapids, and Bob Peterson from Des Moines. Alan and Helene Magruder from Indianola, Ron Heinen of Ames, Larry Totton of Granger, Bob West of Des Moines, Ivan Hanthorn of Ames, and Bill Todd of Indianola have also been long time contributors. Dave Lowman is also a vendor for IBA; he has a number of trees at his greenhouse, DaSu Studio in Kelley, Iowa (515-769-2446), just south of Ames. Dave also carries a number of supplies such as pots, soil, tools, wire, fertilizers and books. Dave makes his own special pots and vends at a number of Midwest events. He also conducts workshops and gives lessons.

(The above historical information was originally prepared for the ISHS 125th Anniversary Publication by Naomi Maahs, IBA Vice President in 1991. It was revised and updated by David Richmond, President, in 2013.)